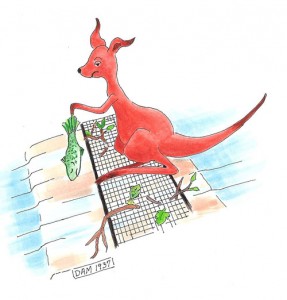 Our Fish and Fowl Management Efforts

The best resource we have for understanding the fish in Kangaroo Lake is to review the DNR’s fish surveys historically conducted every four years. The latest was done in 2018. You can find all fish surveys in our Learning Center under DNR Fish Surveys.

It is important to be familiar with Wisconsin’s fishing regulations. Please note: there is a special minimal size of 18 inches and bag limit of three for walleye in Kangaroo Lake, beyond the standard State of Wisconsin size and limits (Administrative code NR 20.20 (15)(d)). This is to help the walleye population through enabling more fish achieve breeding age.

In  2014 we received a grant to help our shorelines - the Shoreline Preservation & Restoration Planning and Action Grant (2014-2017). We have completed our work on our three-year project.  Here is the report from that grant: Final Fish Stick Project Report - 2017

Here is some information on the plan we had in 2014 and the work that was done to complete the project: WDNR Scott Van Egeren's Presentation on Shoreline Preservation, July 2014

Tom Schneider produced a Fish Stick Brochure tat was distributed to members that were interested in placing Fish Sticks on their shoreline.

FishSticks: Activities and Education - Here are some good educational and reference links

In 1966, the Kangaroo Lake Association installed 22 fish cribs in the lake. Between 2002-2007, the KLA with the DNR’s approval, installed 31 more cribs at depths of 9 feet south of the island. See Map, the construction and installation of the fish cribs into Kangaroo Lake links, and KLA Grants and Projects for more information.

Kangaroo Lake consists of 1,123 acres divided by a causeway between a north and south basin. It is a very shallow lake with an average depth of about 6 feet and an extremely small area with a maximum recorded depth of 12 feet.

During recent decades, Kangaroo Lake has been undergoing ecological changes. Beneficial aquatic plants have declined in both density and diversity. The bulrush patches of the lake have deteriorated so that a majority of the remaining patches are located in the protected portions of the lake. Two different types of algae are now becoming prevalent on the shores of the south basin. The lake’s water clarity is of concern due to the loss of aquatic plants that normally serve to absorb phosphorus. The lake is moving from a game fish lake to a pan fish lake. Eurasian Water Milfoil has definitely established itself, and the lake has been added to the watch list for Zebra Mussels. VHS (Viral Hemorrhagic Septicemia) is a fish disease somewhat recently found in fish of the Great Lakes including Lake Michigan and we must be vigilant in our efforts to prevent this disease from entering Kangaroo Lake.

Kangaroo Lake is being significantly impacted by the swirling thrust of motors and hull wash which are disturbing the lake bottom and uprooting the shallowly-rooted aquatic plants. The disturbed bottom may then be further disturbed by wind and wave activity. These actions are adversely altering the lake’s ability to maintain a healthy homeostasis and support its game fish population. Kangaroo Lake is rapidly losing its fundamental aquatic plants that are the only natural barrier to the Eurasian Water Milfoil.