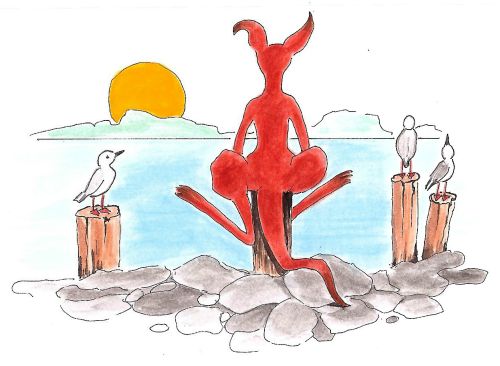 The most important reason to be/become a member of the Kangaroo Lake Association (KLA) is “being part of something larger than ourselves.” The KLA mission is:

“preserve and protect Kangaroo Lake and its surroundings and to enhance the water quality, fishery, boating safety and aesthetic values of Kangaroo Lake, as a natural resource and as a public recreational facility for today and for future generations.”

We can help fulfill this mission as individuals or with our family. But together, we can make a greater difference. We don’t “own” Kangaroo Lake. We are special stewards of our lake. The definition of steward is: “one who manages another’s property, finances, or other affairs," (American Heritage College Dictionary). Over the years, we have learned so much from experts and knowledgeable professionals and volunteers inside and outside our KLA - information many of us would not learn as individuals.

It is not a surprise that we who own or live on the lake or near the lake, have a special passion for the changing beauty we experience when we spend time “on the lake.” We have observed what the lake was like before development and use of the lake increased over the years. We search for the goal of maintaining a healthy lake and eco-system for all.

We renew our membership by paying nominal dues annually. We receive newsletters, special educational papers, and attend meetings that help us grow in our knowledge of the lake. Additionally, membership ensures the opportunity to participate in member-only social events, to provide input to the KLA Board through association meetings, as well as to volunteer for various committees or for the opportunity to serve on the board.

Membership information that is password protected and changed annually is available on the membership page of our website, e.g., contact information with the KLA’s Board of Directors, other members, past newsletters, KLA business details such as meeting dates, agenda, volunteer opportunities and special membership news.

Our most satisfying goal would be to have everyone with property on the lake or within one mile, be an active member of the KLA. Together, we can fulfill our mission.

Articles of Incorporation and Bylaws

Our Constitution and Bylaws

1996-1999  KLA applied for and received an Eurasian Water Milfoil Grant. Weevils were placed on the Milfoil to eat and eradicate this invasive plant. Normally, the weevils would winter on shore and swim back to the plants in spring. Our lake was too large and the weevils were not able to make the trip back to the middle of the lake.

2000-2002  KLA applied to a grant to place buoys on the south end of the lake to protect the remaining bulrushes from the boats. They asked for and obtained an ordinance to make this portion of the south end a slow no-wake area for boating. A map of the No-Wake Zone is here.

2002-2007  KLA applied for a grant and permission to place fish cribs in the lake. Over a period of two years 31 cribs were constructed and placed at a nine foot depth in the lake. Click here for a map of the locations of the Cribs.

2003-2004  KLA applied for a grant to partially fund a Comprehensive Lake Management Plan for Kangaroo Lake. Tim Hoyman of NES Ecological Services conducted the two year study. Here is the report that was created.

2005-2008  KLA applied for a grant and permission to plant bulrushes in the south end of the lake. Bulrushes were planted in numbered plots so that records could be kept for three years. This project was not successful as the water dropped in the lake the first year and the plants were exposed to dry conditions and freezing weather. A map of where the bulrushes were planted is available.

2008-2013  At present, KLA is monitoring 530 GPS sites on the lake for the presence or absence of Eurasian Water Milfoil (EWM). We are working with Baileys Harbor Town Board to treat the EWM along the causeway to prevent it spreading into the north end of the lake.

2014-2018  KLA applied for a grant and permission for shoreline preservation and restoration planning and action. The key initiatives are 1) to work with landowners to drop trees (fish sticks) along the shoreline, per approved WDNR methods, to help restore shoreline ecosystems and 2) to plant bulrushes in Kangaroo lake, as a means to help protect the shoreline and healthy native plantlife. A second smaller grant was awarded in 2018 to continue these initiatives.

2016-2018  KLA applied for a grant to partially fund an update to the 2004 Comprehensive Lake Management Plan for Kangaroo Lake. Tim Hoyman of Onterra LLC conducted the two year study. Here is the report that was created.

Historical Milestones of the KLA

1920’s  - A Kangaroo Lake Improvement Club existed prior to the formation of the Association.

1966 - 22 fish cribs, financed by the Department of Natural Resources (DNR), were put in the lake.

1967-69 - KLA adopted a Constitution and Bylaws and was incorporated.

1970's - KLA was instrumental in raising the dam 4 inches and installing a dam (carp) barrier.

1989 - A proposal to install a sewer system around the lake was tabled.

1996-97 - The DNR designated the north end of the lake as a “Sensitive Area” by state statute.

1997 - A local and state ordinance prohibiting motor craft on the north end of the lake was obtained from Baileys Harbor and Jacksonport Town Boards.

1997-98 -  A new carp barrier was constructed and attached to the original barrier on the dam.

1999 - The new board produced its first membership Directory.

2000-02 - KLA obtained an ordinance to place slow no-wake buoys on the south end of the lake to protect remaining bulrushes from motor craft.

2002 - KLA applied for and received a three year Comprehensive Lake Management grant from the DNR and hired NES Ecological Services to conduct the study.

2002-03 - KLA applied for and received a grant from DNR for placement of 31 fish cribs in the lake to improve fish habitat.

2003 - DNR designated six areas on the lake as “Sensitive Areas”.

2004 - KLA started a continuing series of Educational Papers for the membership.

2004-05 - KLA applied for and received a grant from the DNR to plant bulrushes in the south end of the lake.

2005 - KLA published a book “A History of Kangaroo Lake”, edited by Patricia Williamson.

2005 - The membership voted to establish a voluntary, 500 foot slow no-wake zone around the edge of the lake and the island.

2006  -  Baileys Harbor Town Board pays for the ongoing chemical treatment of EWM.

2007 - The DNR cored lake sediments for paleolimnological markers to evaluate present water quality characters (diatoms, plants, fish) with those of the early settlement period, 100 (plus) years ago.

2008  - KLA initiates a continuing study of precipitation patterns over the watershed.

2010  - The first ever, fresh water sponge was found in KL while conducting the EWM survey.

2012 - The KLA Board contracted with UWSP (University of Wisconsin at Stevens Point) to conduct a “Kangaroo Lake Resident Survey”.

Kangaroo Lake consists of 1,123 acres divided by a causeway between a north and south basin.  It is a very shallow lake with an average depth of about 6 feet and an extremely small area with a maximum recorded depth of 12 feet.

During recent decades, Kangaroo Lake has been undergoing ecological changes.  Beneficial aquatic plants have declined in both density and diversity.  The bulrush patches of the lake have deteriorated so that a majority of the remaining patches are located in the protected portions of the lake.  Two different types of algae are now becoming prevalent on the shores of the south basin.  The lake’s water clarity is of concern due to the loss of aquatic plants that normally serve to absorb phosphorus.  The lake is moving from a game fish lake to a pan fish lake.  Eurasian Water Milfoil has definitely established itself, and the lake has been added to the watch list for Zebra Mussels and a deadly fish virus.

Kangaroo Lake is being significantly impacted by the swirling thrust of motors and hull wash which are disturbing the lake bottom and uprooting the shallowly-rooted aquatic plants.  The disturbed bottom may then be further disturbed by wind and wave activity.  These actions are adversely altering the lake’s ability to maintain a healthy homeostasis and support its game fish population.  Kangaroo Lake is rapidly losing its fundamental aquatic plants that are the only natural barrier to the Eurasian Water Milfoil.

In 2006, KLA created a List of Priorities and associated projects designed to allow a coordinated effort to address these challenges.

As part of KLA's 2018 Comprehensive Management Plan, an Implementation Plan was created that updated our goals and reprioritized our upcoming projects. To view the full 2018 Management Plan click here.

It is a goal of the KLA to advocate for the health and welfare of the lake.